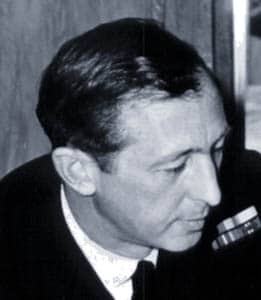 Commander J.M. Sharpey-Schafer  was a Royal Navy Hydrographic Officer who was loaned to the Royal New Zealand Navy in 1948.  On his arrival he was posted as Commanding Officer to the survey ship HMNZS LACHLAN which was loaned to the RNZN by the Royal Australian Navy.  Sharpey-Schafer was the first Commanding Officer of HMNZS LACHLAN and lead the commissioning of the ship.  He talks of the changes that were required to fit the ship for survey duties and also of surveying the New Zealand coast where little had been done for many years.

Coincidentally Sharpey-Schafer had served just prior to World War II in the ship HMS ENDEAVOUR which was attached to the New Zealand Station 1937-39 for hydrographic duties and was the first ship to survey the New Zealand coast since 1848.

Commander Sharpey-Schafer talks of the early surveys which were done very quickly to produce charts for the Merchant Navy who were increasing rapidly in size and were in great need of accurate charts.

While in command of HMNZS LACHLAN the ship was utilised in Westport to help man the mines during the 1951 wharf strikes.

Commander Sharpey-Schafer returned to the United Kingdom and the Royal Navy in 1952.