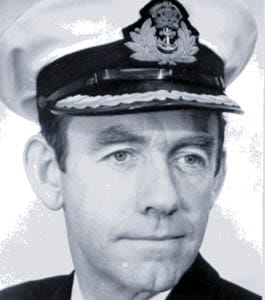 Commander Henry Simmonds joined the Royal New Zealand Navy as a Cadet in 1945.  He undertook training at HMS BRITANNIA Royal Naval College; at that time it was located at Eaton Hall, Cheshire, having been evacuated there during World War II.  After cadet training in the Cruiser HMS FROBISHER he undertook engineering training at the Royal Naval Engineering College at HMS DRAKE and then completed his Watchkeeping Certificates in various ships of the Royal Navy.

Commander Simmonds returned to the Royal New Zealand Navy in 1951 and was posted to the cruiser HMNZS BELLONA.  He experienced the Wharf Strike in that cruiser.  He served in the Frigate HAWEA during the Korean War.  After a stint in Navy Office, Wellington, Commander Simmonds was posted to the New Zealand High Commission in London as the Technical Assistant.  He was the first Engineer Officer of the Frigate HMNZS TARANAKI which he commissioned on completion of its building.  He became the Commander (E) of the cruiser HMNZS ROYALIST and was there during the break down in the Coral Sea which he describes in some detail.

After a period as Engineer Manager in the HMNZS Dockyard, Commander Henry Simmonds retired from the Royal New Zealand Navy in June 1970.