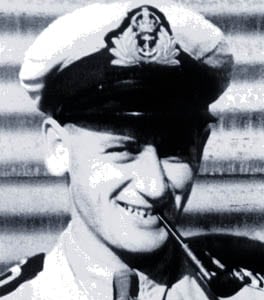 Lieutenant Commander Alexander Brunt joined the New Zealand Division of the Royal Navy Volunteer Reserve in 1940.  He travelled to Britain onboard the passenger-cargo steamer AKAROA and upon his arrival was sent to the training establishment HMS ST VINCENT for basic training.  Once he had completed his time at that venerable training establishment, he did his flying training at various shore establishments in the British Isles.  After completing his training in the middle of 1941 Brunt joined an Albacore Squadron – the 826 – which was based in Egypt.  He spent eighteen months flying operations in the desert, mainly flare dropping to pinpoint targets for RAF bombers.  He was awarded the Distinguished Services Medal for his part in an attack on an enemy convoy whilst operating from a temporary airstrip well behind enemy lines in the desert.

In early 1943 Brunt returned to the British Isles and was posted to the 834 Squadron stationed in Exeter, which at that time was operating against enemy motor torpedo boats in the English Channel.  Shortly thereafter 834 Squadron transferred to Ireland, where they “worked up” the aircraft carriers HMS HUNTER and HMS BATTLER before being sent for six months into the Red Sea to conduct anti-submarine patrols between Aden and Bombay.  A period of leave in New Zealand followed after which Brunt returned to the British Isles and a brief stint with the 717 Squadron.  He then was posted in mid 1945 to the aircraft carrier HMS SPEAKER which was part of the British Pacific Fleet for the remainder of World War II.

Alexander Brunt was discharged on the first of January 1946 having achieved the rank of Lieutenant Commander.