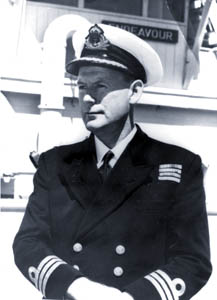 Commander John Washbourn joined the Royal Navy in 1936 as a Special Entry Cadet and sailed for Britain onboard the passenger ship SS RANGITIKI.  He joined the cadet training ship HMS ERUBUS, followed by further training onboard the cruiser HMS FROBISHER. Midshipman training in the A class submarine HMS AMPHION followed.  In 1940 he joined the battleship HMS RAMILLES which was subsequently sent to New Zealand in 1940 to act as an escort ship on troop carrying voyages up into the Middle East.  Later that year Washbourn, by then a Sub Lieutenant, was appointed to the cruiser HMS DANAE which was serving in the Singapore/Java area and subsequently was a witness to the fall of Singapore and the Battle of the Java Sea. Washbourn commanded an infantry landing craft during its delivery from the United States to Gibraltar and took part in the North African landings. In 1943 he joined the cruiser HMNZS Gambia and was onboard during that ship’s activities in the Indian Ocean and operations against the Japanese in Indonesia.  He remained with HMNZS GAMBIA when the ship became attached to the British Pacific Fleet and was present during the fall of Japan in the last days of World War II.  Washbourn was one of the first ashore in Japan as second in command of the operation force at Yokosuka dockyard.

In November 1947 Washbourn commissioned into the Royal New Zealand Navy.  He served as First Lieutenant of the frigate HMNZS PUKAKI during the deployment to take part in the Korean War, and was onboard the cruiser HMNZS BELLONA during the wharf strike of 1951.  In early 1952 he took command of the frigate HMNZS TUI and in late 1955 travelled back to the United Kingdom to stand by the modernisation of the cruiser HMNZS ROYALIST in the following year.  Washbourn returned to New Zealand and in 1958 assumed command of the Antarctic supply ship HMNZS ENDEAVOUR for one of the early voyages to Antarctica. He joined the South East Asian Treaty Organisation (SEATO) staff in Bangkok in 1965 for a year, returning to New Zealand and becoming Queens’ Harbour Master at HMNZS Dockyard in Auckland.

John Washbourn retired from the RNZN in November 1968 having attained the rank of Commander.