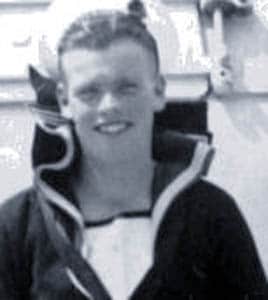 Chief Petty Officer David McCurrie joined the New Zealand Division of the Royal Navy in 1937 as a Boy Seaman.  Basic training was onboard the non-sea-going training ship HMS PHILOMEL and it was nearly a year before McCurrie experienced sea time onboard the cruiser HMS LEANDER where he stayed until late 1943 apart from brief periods of time at the shore establishments HMNZS PHILOMEL, and HMNZS COOK; and onboard the armed merchant cruiser HMNZS MONOWAI.  McCurrie saw out the remainder of World War II in HMNZS ACHILLES before being sent to the training establishment HMAS CERBERUS in Australia to do further training courses.

After a brief period as an instructor at the training establishment HMNZS TAMAKI on Motuihe Island, McCurrie was then posted to the cruiser HMNZS BELLONA until 1949, followed by time onboard the cruiser HMNZS BLACK PRINCE.  By late 1954 McCurrie was back at HMNZS TAMAKI as an instructor where he stayed for almost three years training seaman boys.  He then posted to the shore base HMNZS PHILOMEL where he remained until his retirement in May 1959 having attained the rank of Chief Petty Officer.