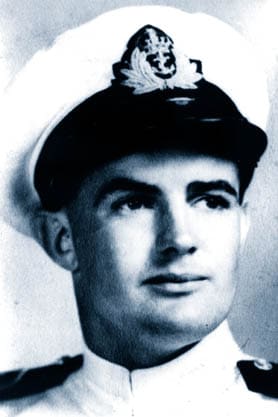 Lieutenant Derek Morten joined the Royal New Zealand Navy Volunteer Reserve in 1942 as a Naval Airman 2nd Class.  He spent a short time at the training establishment HMNZS TAMAKI on Motuihe Island before proceeding to Britain -via Halifax, Canada- onboard the merchant ship CAPETOWN CASTLE for airman training.  After eight months at the training establishment HMS ST VINCENT he volunteered for training in the United States.Morten sailed to Boston onboard the troopship QUEEN MARY then to the flying school at Grosse Ile, an American Naval Flying School just outside Detroit.  Further training followed at a flying school in Pensacola from May to September 1943, after which he qualified as a pilot, joining a British training squadron, 732.  By March 1943 Morten was a member of 1841 squadron, flying Corsair fighter aircraft.  He returned to Britain onboard the aircraft carrier HMS SMITER arriving in June 1944.  His squadron joined the fleet aircraft carrier HMS FORMIDABLE for operations against the TIRPITZ which was moored in a Norwegian fjord.  Morten was involved with two attacks on this ship and awarded the Distinguished Service Medal for his efforts.

HMS FORMIDABLE then joined the British Pacific Fleet for operations over the Japanese mainland where Morten’s aircraft crash landed in the sea.  He spent some hours in a rubber dinghy before being picked up by an American submarine and was consequently Mentioned in Despatches.  By this stage World War II was drawing to a close; HMS FORMIDABLE, which at that time had sustained some damage, was sent to Sydney, Australia for repairs and Morten himself was flown back to New Zealand for leave.

Derek Morten was discharged on the 31st December 1945 having attained the rank of Lieutenant.