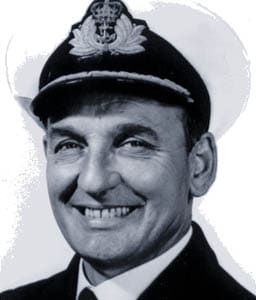 Commander Stanley Hermans, then a newly qualified school teacher, joined the New Zealand Division of the Royal Navy in 1939 as a Warrant Schoolmaster.  After a brief period in the training establishment HMS PHILOMEL he was sent to Britain onboard the Shaw Savill passenger-cargo steamer AKAROA for training at HMS DEFIANCE.  Further training followed at training establishments HMS DRYAD followed by a staff position at HMS GANGES.  In mid 1940 he joined the cruiser HMS LEANDER which was at that time based in the Indian Ocean and describes this ships operations in the early part of World War II including the sinking of the Italian raider RAMB1 and engagements with the Vichy French at Beirut.

In late 1941 HMS LEANDER returned to New Zealand briefly before joining an ANZAC squadron in the Pacific.  During the latter part of World War II Hermans trained young sailors at HMNZS TAMAKI.  Following a period onboard HMNZS ACHILLES as part of the occupation force in Japan and service in HMNZS BELLONA he spent the remainder of his career involved in educational aspects of the Royal New Zealand Navy.  In addition he was responsible for the setting up of the fleet library at HMNZS PHILOMEL and was very active in sports management, completing the remainder of his service as the Director of Naval Educational Services.

Stanley Hermans retired from the RNZN on 16 March 1971 having attained the rank of Commander.