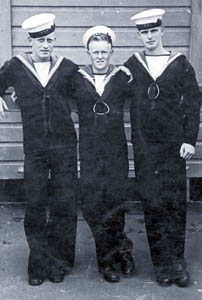 Able Seaman Jack Brock joined the Royal New Zealand Navy as a Seaman Boy in 1943.  After completing basic training at HMNZS TAMAKI on Motuihe Island he boarded the Shaw Savill and Albion passenger-cargo steamer AKAROA for England via New York.  While at the training establishment HMS DRAKE, he worked in the Plymouth dockyard ammunitioning MTB’s (motor torpedo boats).

In early December of 1944 Brock was posted to the LSI(L) [landing ship infantry (large)] HMS SILVIO which was destined for troopship service in the Indian Ocean, before being part of the push into Singapore.  The HMS SILVIO was badly damaged and forced into dry dock in Bombay.  Brock then boarded the LSI(L) HMS SANSOVINO, which continued the HMS SILVIO’s troop moving operations, including off-loading troops in Port Swettenham as part of  “Operation Zipper”.

At the cessation of conflict in the area he spent six weeks in camp – HMS WAYINA in Colombo – awaiting the means by which he could return to New Zealand which eventuated onboard the aircraft carrier HMS ATHELING.

Jack Brock was discharged from the RNZN in March 1946 having attained the rank of Able Seaman.