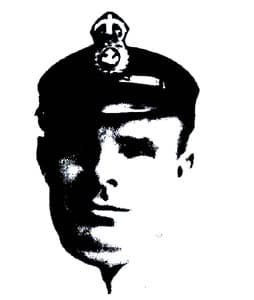 Chief Yeoman of Signals Lincoln Martinson joined the New Zealand Division of the Royal Navy in 1921, however, before he did this he had undertaken training in the training ship AMOKURA which was a New Zealand Government training ship for boys wishing to join either the Merchant or Royal Navy.  Martinson underwent basic training in HMS CHATHAM as a boy signalman and was sent to Britain in 1923 for further training at Royal Navy establishments there.  He qualified as a Leading Signalman while there and subsequently joined the battleships HMS QUEEN ELIZABETH and HMS REVENGE. Martinson returned to New Zealand in 1924 and was posted to the cruiser HMS DUNEDIN.  Apart from some brief periods ashore he served in either HMS DUNEDIN or HMS DIOMEDE until 1935.

In 1935 Martinson returned to Britain to do his Yeoman of Signals courses and spent the next five years in the battleships HMS BARHAM and HMS HOOD during the Spanish Civil War and describes various actions onboard these ships including assisting a British merchant ship which was being fired upon by Spanish shore batteries.

Martinson was then posted to the cruiser HMS ACHILLES in 1939 and was onboard that ship during the Battle of the River Plate.  He describes this conflict from his action station on the bridge and was responsible for seeking permission from Captain Parry to hoist the New Zealand flag as HMS ACHILLES battle ensign.  Martinson was badly injured during the Battle of the River Plate losing a leg and was consequently awarded a Distinguished Service Medal.

Lincoln Martinson spent the remainder of World War II ashore in HMS PHILOMEL, training signalmen, retiring in February 1945 upon the cessation of hostilities.