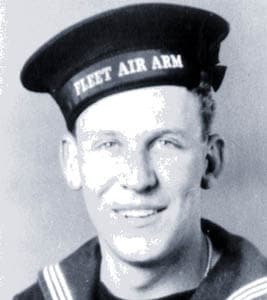 Temporary Lieutenant (A) William Billings joined the Royal Navy Volunteer Reserve in 1940, destined for pilot training with the Fleet Air Arm.  He sailed to Britain onboard the Aberdeen Line passenger-cargo steamship AKAROA.  After basic training at ST VINCENT and pilot training at various shore establishments, Billings qualified to fly the Walrus aircraft; this was the sea plane carried onboard cruisers and capital ships that was catapulted from the ship and recovered by crane after landing in the water alongside.  Within a year Billings had completed the necessary courses and training and was  promoted to Temporary Sub Lieutenant Airman and he joined 751 Squadron which was based at HMS CONDOR, the Royal Naval Air Station at Arbroath.  He then transferred to 700 Squadron and, as is the case with airmen, spent time in a number of shore stations in the British Isles including the Orkney Islands.

In 1942 Billings returned to New Zealand, once again onboard  the steamship AKAROA as he had been posted to the cruiser HMNZS ACHILLES as their pilot.  The ship was mainly carrying out convoy work with the Americans in the Pacific.  Billings talks in particular of two incidents in which he was directly involved:  when the Walrus was mistaken for an enemy aircraft conducting a raid on Brisbane and when American fighter planes fired across the Walrus that Billings was flying.

Billings was posted to Ceylon in early 1943 and talks of the building of a Fleet Air Arm airfield at Puttalam in the build up to the invasion of Burma.  While in Ceylon he was severely injured in an aircraft accident and was retired from the RNZVR in 1944 having achieved the rank of Temporary Lieutenant (A).