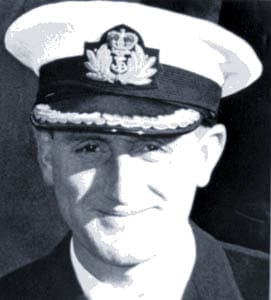 Surgeon Captain Thomas Logan joined the Royal New Zealand Navy in 1952 and after a period of time as the dentist at HMNZS TAMAKI, the training establishment on Motuihe Island, he saw service in Korea onboard the frigates HMNZS KANIERE and HMNZS HAWEA.During this time he was seconded to the New Zealand Army and experienced the Korean War ashore, on the front line.  Service both ashore and onboard the cruisers HMNZS BLACK PRINCE and HMNZS ROYALIST followed until 1961 when he was sent to the United Kingdom to specialise as an oral surgeon.

The remainder of Logan’s time in the RNZN was spent ashore in HMNZS PHILOMEL, apart from a brief period onboard the Antarctic support vessel HMNZS ENDEAVOUR as part of the mobile dental unit.  In 1969 Navy dentists integrated with those in the New Zealand Army to become the Royal New Zealand Dental Corp, with Logan taking on the position of Director of Defence Dental Services.

Thomas Logan retired from the RNZN in April 1977 having attained the rank of Surgeon Captain.