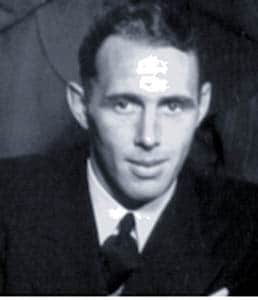 Lieutenant Colin Vickers joined the Royal New Zealand Navy Volunteer Reserve in 1942 for service in the Fleet Air Arm of the Royal Navy.  He underwent basic training at the shore establishments HMS ST VINCENT and HMS DAEDALUS and was then sent to Canada for specialised flying training .  On gaining his wings in late 1943 Vickers returned to Britain and was posted to a variety of shore establishments to further his training and experience in a wide variety of aircraft, especially Corsairs.  In mid 1945 Vickers was posted to the Aircraft Carrier HMS VENERABLE, joining the 1851 Corsair Squadron onboard that ship.  HMS VENERABLE joined the British Pacific Fleet for the latter stages of World War II, spending time in Hong Kong where her crew was used to round up the Japanese occupation force.  By January 1946, with the cessation in hostilities, Vickers was repatriated back to New Zealand and was subsequently demobbed.

In 1950 the Royal Navy sought the services of former New Zealand Fleet Air Arm pilots and Vickers joined the Royal Navy.  He qualified in Gannet ASW aircraft and joined the experimental squadron that was testing this aircraft for operational service.

Colin Vickers retired from the RN in 1955 having attained the rank of Lieutenant.