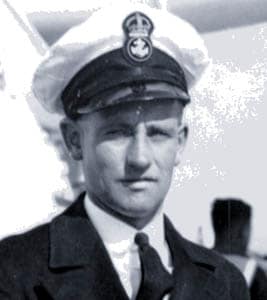 Lieutenant Commander Thomas Luckman joined the New Zealand Division of the Royal Navy in 1928.  After 18 months of basic training in the shore establishment HMS PHILOMEL he was posted to the cruiser HMS DUNEDIN in May 1931.  Luckman spent most of the 30’s in either HMS DUNEDIN or the cruiser HMS DIOMEDE.  Luckman was in HMS DUNEDIN when the ship was in Napier to assist after the major earthquake in 1931.  In 1936 he was posted to the cruiser HMS ACHILLES and saw action in the Battle of the River Plate in December 1939, where he was a magazine handler in one of the aft magazines.  Luckman stayed with HMS ACHILLES until 1942 when he was posted ashore to HMNZS PHILOMEL.  He was promoted to Warrant  Supply Officer in February 1942.  In November 1946 he was commissioned as a Lieutenant (S).

He stayed in HMNZS PHILOMEL until mid 1947 when he joined the Flower class corvette HMNZS ARBUTUS as Supply Officer.   In 1949 he was posted to the training establishment HMNZS TAMAKI on Motuihe Island as a Supply Officer for a year.  Two years in Navy Office in Wellington followed.  His final two sea postings were to the cruisers HMNZS BELLONA in August 1954 and  HMNZS BLACK PRINCE in September 1955 as Supply Officer.

Thomas Luckman retired from the Royal New Zealand Navy in September 1957 having attained the rank of Lieutenant Commander.