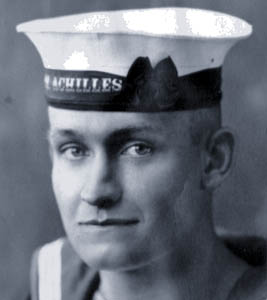 Chief Petty Officer Norman Sim joined the New Zealand Division of the Royal Navy as a Stoker in 1934.  After basic training in the shore establishment HMS PHILOMEL he  was posted to the cruiser HMS DIOMEDE,  followed by the cruiser HMS ACHILLES in mid 1934 for the journey back to New Zealand when HMS DIOMEDE was paid off in Britain. In March of the following year Sim was sent back to Britain where he joined the battleship HMS REVENGE, at that time a training ship for Seaman Boys, for a period of one year.  Sim joined HMS ACHILLES once more, in Malta in mid 1939.  While onboard HMS ACHILLES he experienced the Battle of the River Plate from his action station which included a damage control party in the after boiler room.  Sim returned to the United Kingdom in 1943 in the cruiser HMS ACHILLES which undertook a major refit.  Sim served in the destroyer HMS METEOR and experienced five convoys from Britain to Murmansk in Russia.  Towards the end of the war HMS METEOR was sent to the Mediterranean and experienced action off Italy and the south coast of France.  Sim was Mentioned in Despatches for his endeavours during an action with some Italian warships during this time.

With the cessation of hostilities Norman Sim returned to New Zealand in 1945 and was discharged in February 1946 having attained the rank of Chief Petty Officer.