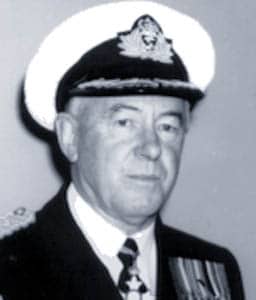 Surgeon Captain Eric McPhail joined the New Zealand Division of the Royal Navy Volunteer Reserve in the early 1930’s and was called up for service in 1939 on the outbreak of World War II.  He served as a Medical Officer  at the Navy Hospital followed by a long stint in the Armed Merchant cruiser HMNZS MONOWAI where he attained the rank of Lieutenant Commander.  In 1942 McPhail was posted to HMNZS LEANDER and describes the action at Kolombangara from a doctor’s point of view.  By 1943 he was once more ashore and was posted to HMNZS COOK in Wellington as Naval Surgeon until the end of the war when he was posted to the Royal New Zealand Navy Hospital (RNZNH) becoming at that point Surgeon Captain.  Eric McPhail remained at the hospital as Surgeon Captain for fifteen years until he retired in 1962.