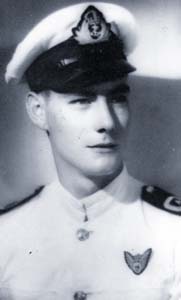 Lieutenant Ian Quilter joined the Fleet Air Arm of the Royal Navy in April of 1941, undergoing basic training at the training establishments HMS DAEDALUS and ST VINCENT before being posted to the Royal Air Force base ELMDON in order to complete specialised pilot training. He dropped out of the pilots’ course as he was too tall at six foot four to fly Tiger Moths and consequently retrained as an observer/navigator.

Quilter was posted to Trinidad in the West Indies in late 1942 for further training, sailing via New York and New Orleans onboard the converted troop carrier HMS QUEEN MARY and was based in HMS GOSHAWK the Royal Naval Air Station in Port of Spain.  Quilter returned to Britain in May of 1943 and was posted to the Royal Naval College at Greenwich to undertake officer training.

By early 1944 Quilter had joined 811 Squadron who were at that time engaged in spotting and depth charging U-boats for Atlantic convoys.  On the 14th of July 1944 while performing these duties the engine failed on Quilter’s aircraft during take off from the RAF air field at Limavady in Northern Ireland.  The aircraft crashed with full fuel tanks and immediately burst into flames and Quilter subsequently suffered serious third degree burns to his hands and face.  He was immediately taken to the local hospital and, once stabilised, was transferred to Cosford, the RAF hospital in Birmingham.  While there he was lucky enough to be selected by Dr Archie Macindoe as a “guinea pig” for the surgeon’s newly established and revolutionary burns’ unit at a civilian hospital in East Grinstead.  Quilter was one of only two naval personnel to be included in the programme that over the years rebuilt the lives and faces of some six hundred burns victims.

Ian Quilter was discharged from the Royal Navy in September of 1947 having attained the rank of Lieutenant.