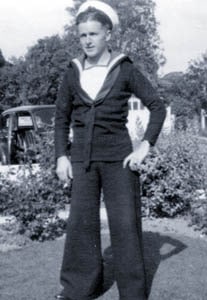 Leading Telegraphist Paul McGee joined the New Zealand Division of the Royal Navy in August 1940 as a telegraphist, due to his prior employment with the Post Office Corp of Signals.  After completing basic training at HMNZS PHILOMEL he travelled to Britain onboard the New Zealand Shipping Company passenger-ship RANGITATA to continue his communications training at the training establishment HMS DRAKE.  He was then posted to the battleship HMS DUKE OF YORK where he experienced Arctic convoys at Scapa Flow and also exercises in the Shetland Islands area.

In April 1942 McGee joined the Tyne class destroyer depot ship HMS HELCA, travelling back to New Zealand to assume a posting when the ship hit a German mine in Walvis Bay, South Africa.  HMS HELCA was in dry dock for some five months undergoing repairs which resulted in the ship’s plans changing.  McGee then joined the destroyer HMS NESTOR for the remainder of the journey back to New Zealand.  He posted to Navy Office, Wellington for 12 months followed by a further shore posting to HMNZS PHILOMEL.

Paul McGee was discharged in March of 1945, having attained the rank of Leading Telegraphist.