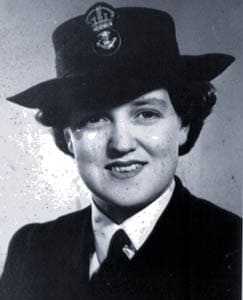 In May 1945 Chief Wren Matthews was posted to the Drafting Office in HMNZS PHILOMEL.  She proceeded to the United Kingdom in 1946 to be part of the Victory Parade and talks of this in some detail.  On her return to New Zealand in September 1946 she left the Womens Royal New Zealand Naval Service.  Matthews rejoined the WRNZNS  in May 1947, staying for a period of less than a year.