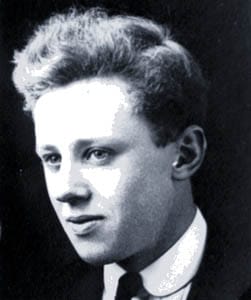 Air Mechanician Sydney Hesse immigrated to New Zealand in 1920.  In 1917 at the age of seventeen he joined the Royal Naval Air Service as an Air Mechanic Second Class (Chemistry).  He was posted to an experimental unit whose role was the development of unusual weapons.  They made incendiary rockets to bring down Zeppelins, flame throwers and rocket propelled depth charges.  The unit was led by a Commander Brock whose family owned a large fireworks factory in the United Kingdom.

In 1917 the German U Boat problem was reaching its zenith.  Many of the U Boats were based at Bruges whose port was connected to the North Sea by two ship canals at Zeebrugge and Ostend.  An operation was planned to seal off these canals with block ships.  The Germans had well prepared defences and a problem for the Royal Navy was to approach these defences under cover of a smoke screen.  Funnel smoke, being hot, rises in the air and the glow from burning phosphorous used in those days to make low lying smoke can be seen at close range.

The Royal Naval Air Service unit that Sydney Hesse belonged to was given the task of developing a suitable smoke.  The technique developed was to inject into the funnel gases Chloro Sulphonic acid, this created a dense white smoke which settled on the sea.  Chloro Sulphonic acid was used to make Saccharine; to obtain enough chemical for the operation Saccharine plants were closed in the United Kingdom for six months.  Air Mechanic Sydney Hesse was posted to the destroyer HMS PHOEBE to inject this chemical into the after funnel.

Sydney Hesse describes the action at Zeebrugge from his station on the upper deck near the after funnel.  He recalls the sinking of  the ship NORTH STAR and the rescue of her survivors by the Dido class anti-aircraft cruiser HMS PHOEBE.  This is a very unique description of a most significant operation in World War 1.