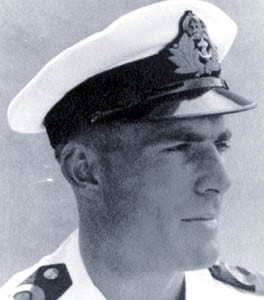 Instructor Lieutenant Arthur Long joined the Royal New Zealand Navy for the first time as “hostilities only” Fleet Air Arm candidate on 15 June 1944.  After a few months of basic training at HMNZS TAMAKI on Motuihe Island he was sent to Britain for Fleet Air Arm training at HMS DAEDALUS and HMS ST VINCENT.  Having completed a number of courses, Long was preparing for a posting in Trinidad as was usual for Fleet Air Arm candidates, when the war ended.  He travelled back to New Zealand and was duly discharged on Valentines Day 1946.

A civilian once more, Long trained as a secondary school teacher and in 1949  was offered the opportunity to rejoin the RNZN as an Instructor Officer – “schoolie” – on a short service five year commission.  Unsurprisingly Long’s first posting was to HMNZS TAMAKI on Motuihe Island where the seaman boys were put through basic training at that time.  Further instructor work followed at HMNZS PHILOMEL before Long joined the frigate HMNZS HAWEA which at that time, 1951, was heading for Korea where the civil war in that country was in its early stages.  Prior to joining HMNZS HAWEA, Long had completed a plotting course at the Australian training establishment HMAS WATSON and so was put in charge of the plot.  Upon arrival in the region HMNZS HAWEA was tasked with patrol duty on the west coast before being sent to the Han River to undertake survey work.

After a year onboard HMNZS HAWEA Long was transferred to the frigate HMNZS ROTOITI which was heading back to New Zealand.  On the way home HMNZS ROTOITI was involved in an intense encounter with the pirate ship HUPEH and  a Chinese gun boat.  Arthur Long served out his commission at HMNZS TAMAKI before re-entering civilian life on 30 January 1954, returning to his previous occupation as a school teacher.

Lieutenant Long kept a comprehensive diary of his time onboard HMNZS HAWEA, a copy of which is held in the Navy Museum archives.