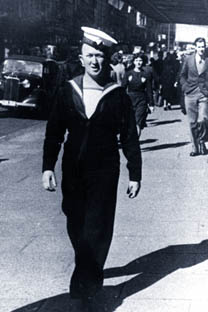 Leading Signalman Owen Slattery joined the New Zealand Division of the Royal Navy in early 1941.  He completed basic training in the shore establishment HMS PHILOMEL and in the examination vessel HMS HAUITI.  He was then posted to the shore establishment HMS LANKA in Ceylon, from whence he joined the cruiser HMS EMERALD.   While onboard HMS EMERALD he experienced the Japanese invasion of Malaya and the incursion of the Japanese Fleet into the Indian Ocean when the cruisers HMS CORNWALL, HMS DORSETSHIRE and the aircraft carrier HMS HERMES were sunk.

In late 1942, after a brief time as a signalman in HMS TANA, a shore establishment in Mombassa, East Africa, Slattery was posted as part of a liaison party to the Royal Dutch cruiser HNLMS JACOB VAN HEEMSKERCK.  Whilst onboard this ship he witnessed the scuttling of the German blockade runner RAMSES. While the HNLMS JACOB VAN HEEMSKERCK was in dry dock in Sydney having a sonar dome fitted in 1943, Slattery was posted back to New Zealand to the Port Signal Station in Wellington.

Less than a year later he was sent to Britain and sailed onboard the Shaw Savill and Albion Line passenger-cargo steamer AKAROA, upon arrival he was posted to the shore establishment HMS NILE in Alexandria from where he joined the frigate HMS DART, at that time based in the Mediterranean. He remained onboard HMS DART until the cessation in World War II hostilities.  Slattery spent a few months in the shore establishment HMAS GOLDEN HIND in Australia before finally returning to HMNZS PHILOMEL in October of 1945.

Owen Slattery was demobilised from the Royal New Zealand Navy in March of 1946 having attained the rank of  Leading Signalman.