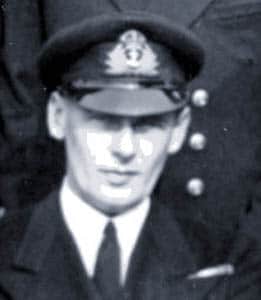 Lieutenant Commander Sydney Hicks joined the New Zealand Division of the Royal Navy Volunteer Reserve in 1928 specialising in signals.  He undertook his mandatory sea training in the minesweeper HMS WAKAKURA and the cruiser HMS DUNEDIN where he remained until 1939.  Courses at the Royal Australian Naval Station HMAS FLINDERS were followed by a short posting to the cruiser HMS LEANDER.  Hicks then spent a considerable proportion of World War II in the cruiser HMS MONOWAI and describes action with a Japanese submarine in the waters off Fiji.  He returned to New Zealand in 1942 to help, and as port signal officer set up radar stations around the New Zealand coast, before taking command of the Isles class minesweeping-trawler HMNZS SCARBA which was involved in the sweeping of the various minefields laid around the Hauraki Gulf and Bay of Islands.  In 1945 Hicks was sent to Britain to take command of the corvette HMS HYDRANGEA and the River class frigate EXE in the final days of the war.

After the cessation in hostilities Hicks returned to  New Zealand and a variety of postings including Commanding Officer of the Canterbury Division of the New Zealand Volunteer Reserve from 1946-52, on the planning staff at Navy Office, Wellington and as the Royal New Zealand Navy Liaison Officer in Australia from 1956-60.

Sydney Hicks retired from the RNZN at the end of 1968 having attained the rank of Lieutenant Commander.