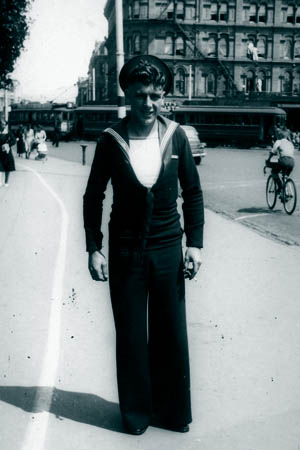 Stoker 1st Class Paul Harris joined the Royal New Zealand Navy Volunteer Reserve as an Ordinary Seaman in early 1944.  In May he transferred to the Stoker Branch and completed appropriate training at the shore establishment HMNZS PHILOMEL.  On completion of training he sailed for Britain via the United States.  Harris commenced training at HMS DRAKE in late 1945, after which he was posted to the Castle class corvette HMS LAUNCESTON CASTLE, and was based out of the shore establishment HMS FERRET in Ireland.  He spent his mandatory sea time on patrol in the Atlantic and North Sea.

After VE and VJ Day Harris was posted back to HMS DRAKE, then to the transit camp HMS LYNEHAM to await passage back to New Zealand, which eventuated onboard the aircraft carrier HMS ATHELING.  Once back in New Zealand Harris was briefly in the decommissioning party of the Bird class minesweeper HMNZS TUI.

Paul Harris was discharged from the Royal New Zealand Navy in March of 1946 having attained the rank of Stoker 1st class.