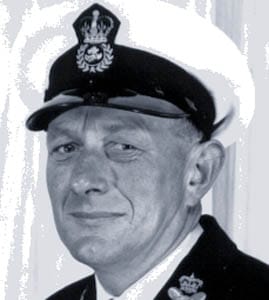 Chief Mechanical Engineer Michael Seyb joined the New Zealand Division of the Royal Navy in 1939 as a Stoker.  After a brief period of training in the shore establishment HMS PHILOMEL he joined the cruiser HMS ACHILLES on that ship’s return from the Battle of the River Plate. He spent from June 1941 to September 1943 onboard, primarily in the Pacific under the operational control of the United States Commander, Pacific, Admiral Nimitz.  HMNZS ACHILLES was generally employed in escort duties, but did provide cover for the occupation of Wallis Island by United States Marines in May/June 1942.  In December 1942, Seyb was onboard when HMNZS ACHILLES joined the United States Naval forces participating in the campaign for the Solomon Islands.  In January 1943 while Seyb was onboard the ship was attacked by four Japanese aircraft and a bomb hit X turret, blowing the top off and killing 13 men and injuring eight others.  Subsequently Seyb was posted to HMNZS GAMBIA in September 1943, followed a year later by a posting to the shore establishment HMS LANKA in Ceylon, from where he served in the degaussing ship HMS SPRINGDALE.

Towards the end of World War II he returned to New Zealand and was based for a time in the shore establishment HMNZS COOK in Wellington.  Upon the cessation of hostilities Seyb was posted to the minesweeper HMNZS HAUTAPU in April 1946, HMNZS TASMAN the shore establishment at Lyttleton in October 1946 and then the cruiser HMNZS ARBUTUS in September 1946.  Time onboard the Bird class minesweeper HMNZS KIWI, cruiser HMNZS BELLONA and frigate HMNZS HAWEA followed.  In early 1957 Seyb joined the newly commissioned cruiser HMNZS ROYALIST, staying with that ship for close to a year before in 1959 becoming a Royal New Zealand Navy Volunteer Reserve Training Officer at HMNZS PEGASUS, the RNZNVR shore establishment in Christchurch where he remained for the next ten years.

Michael Seyb retired from the RNZN in 1969 after 30 years of naval service, having attained the rank of Chief Mechanical Engineer.