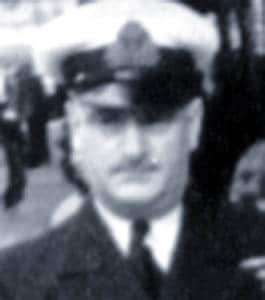 Harris was promoted to warrant officer in 1944 and was the engineering officer in the Flower class corvette HMS ARABIS on its return to Britain.  Service as the first engineering officer onboard the newly commissioned frigate HMNZS TAUPO followed.  In 1949 Harris joined the survey vessel HMNZS LACHLAN which had just been taken over from the Royal Australian Navy.  He spent the latter part of his naval career in the Reserve Fleet in both the shore establishment HMNZS PHILOMEL and in the cruisers HMNZS BELLONA and HMNZS BLACK PRINCE.

Hiram Harris retired from the Royal New Zealand Navy in May 1956 having attained the rank of  Lieutenant Commander.