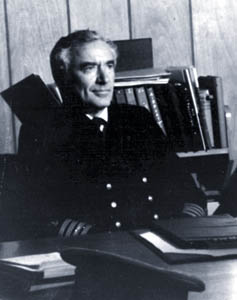 Captain Ross Blair joined the Ranganui, a Northern Company ship as a deck hand in 1944. After a period on board this ship, which was located in New Zealand coastal waters he transferred to the Watchlin Shipping Company and then to Denholms of Glasgow in order to gain deep-water experience so that he could sit his master’s ticket. He studied at the James Watt Memorial School, Greenock, and qualified in record time.

Blair’s first appointment was as an officer with the Lancashire Shipping Company on board Muncaster Castle, an ex-World War II aircraft carrier, which had been converted into a merchant ship.

In 1955, Blair returned to New Zealand and after a short period with the Tasman Shipping Company he joined the Auckland Harbour Board. He served on tugs for a number of years, becoming a pilot in 1965, Deputy Harbour Master in 1972 and Harbour Master in 1974. During this time he bought a tremendous variety of vessels into the Waitemata Harbour including the Royal Yacht Britannia and a number of United States Navy nuclear-powered ships and submarines.

Blair retired having achieved the rank of Captain at the end of 1986.