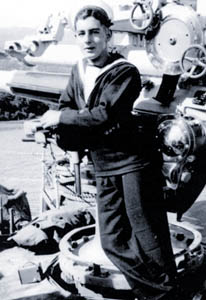 Able Seaman Gordon Forrester joined the New Zealand Division of the Royal Naval Volunteer Reserve and in September 1939 as an Able Seaman  was mobilised.  In December 1939 he was posted to the cruiser HMS ACHILLES and then was posted in August 1940 to the armed merchant cruiser HMS MONOWAI which was patrolling the Pacific.

In 1943 Forrester travelled to Britain for gunnery training onboard HMNZS MONOWAI  and while there gained the qualification of QR3 (Quarters Rating 3).  After completing the gunnery course, he was posted in May 1944 to the destroyer HMS OFFA which was at that time based in the Scapa Flow area on Russian convoy duty.  While in HMS OFFA Forrester was involved in the D Day landings.  He was then posted to the landing craft LC50 which was going to the Far East.  However World War II ended before the ship made it to Malaya and from Ceylon, he returned to New Zealand in the escort aircraft carrier HMS EMPRESS.

Gordon Forrester served briefly at the shore establishment HMNZS TASMAN before taking his discharge in May 1946 having attained the rank of Able Seaman.