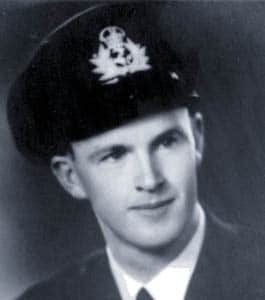 Lieutenant Bruce Hunter joined the Royal New Zealand Naval Reserve under the auspices of Scheme B in December 1941, sailing for Britain via Panama and Halifax onboard the New Zealand Shipping Company passenger motorship RANGITIKI.  He did his basic training at the shore establishment HMS GANGES and did his mandatory sea time in the destroyer HMS VANSITTART. He was onboard during ‘Operation Pedestal’, a major convoy to Malta.  When  HMS VANSITTART returned to Britain in late 1942, Hunter entered the shore establishment HMS KING ALFRED in order to do his officer training, graduating as a Temporary Sub Lieutenant in early 1943.  After completing specialised navigational training at the Royal Naval College at Greenwich, Hunter served in the armed trawler HMS COLDSTREAMER on Atlantic convoy duties.

In early 1944 Hunter was transferred to the newly commissioned corvette HMNZS ARBUTUS as a Gunnery Officer.  After working up and sea trials the ship sailed for New Zealand, running aground in Fiji.  During the later stages of World War II HMNZS ARBUTUS was involved in operations with the British Pacific Fleet, providing a mobile radar repair facility for the Fleet.

Bruce Hunter retired from the Royal New Zealand Navy in December 1945 having attained the rank of Lieutenant.