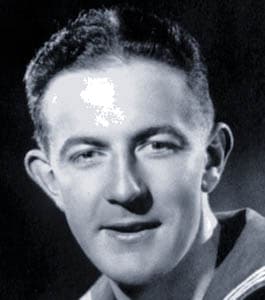 Commander Alfred (Viv) Kempthorne joined the Otago Division of the Royal Naval Volunteer Reserve in 1937.  He was mobilised on the Sunday war was declared in 1939 and within days was in HMS PHILOMEL after which he spent a few weeks on the Castle class trawler HMS WAKAKURA.  Kempthorne spent the early years of the war in the minesweeper HMS COSGROVE in New Zealand waters.  In 1941 he was posted to Britain and ended up in the shore establishments HMS VICTORY and HMS DRAKE.  As a Leading Seaman onboard the minesweeper HMS HUSSAR, he experienced Russian convoy duty and for a time was based in Murmansk.  He was also involved in an action in which German destroyers attacked a convoy, which resulted in the sinking of the cruiser HMS EDINBURGH.

In 1942 he was posted to the training establishment HMS KING ALFRED for officer training and spent the latter stages of the war in the battleship HMS ANSON.  Kempthorne completed signals, damage control and gunnery courses in the shore establishments HMS MERCURY, HMS PRESIDENT and HMS QUEEN CHARLOTTE respectively before joining the light Fleet carrier HMS OCEAN in mid 1945.  In June 1946 having been promoted to Lieutenant, he was commissioned into the Royal New Zealand Navy.  In August 1948 he became the first lieutenant of the frigate HMNZS PUKAKI on commissioning.  He then joined HMNZS ROTOITI in September 1950 in Korea during the civil war.  After this, he became Commander of the naval wireless transmission station HMNZS IRIRANGI based at Waiouru.  Service in the cruiser HMNZS ROYALIST in the late 50’s as executive officer followed.  In addition to his sea time Kempthorne spent time in the personnel field in HMNZS WAKEFIELD, HMNZS TAMAKI and HMNZS PHILOMEL.

Alfred (Viv) Kempthorne retired in December 1968 having attained the rank of Commander.