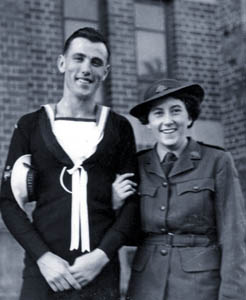 Acting Leading Seaman Peter Money joined the Royal New Zealand Navy in 1941 and was part of the second class of radar operators who trained in HMNZS TAMAKI on Motuihe Island.  His first posting was to Singapore where he joined a motor launch that was patrolling the Sunda Strait and the seas off Jahore Bahru until, due to the Japanese presence in the area, this role became untenable.  Money was then transferred to the minesweeper HMS JERANTUT until it was abandoned at Pelembang, its crew forced to travel by train to Oosthaven in order to board the ex-ferry HMS KEDAH as part of the evacuation of the greater Singapore Malay area.  Unfortunately the HMS KEDAH broke down enroute to Ceylon and had to be towed into port by the vessel DRAGON and later paid off.

While in Ceylon Money trained as a radar counter measures operator before being posted to Australia where, due to a shortage of RCM operators, he was loaned to the Royal Australian and United States Air Forces. Onboard the liberator aircraft Shady Lady, he was involved in skip-bombing missions and reconnaissance. Unusually Money was also involved in RCM work for the Australian army and spent time on Long Island, Papua New Guinea behind Japanese lines. Eventually the navy reclaimed him and Money returned to sea onboard a number of ships in the Eastern Fleet.

Peter Money retired from the RNZN in January 1946 having attained the rank of Acting Leading Seaman.