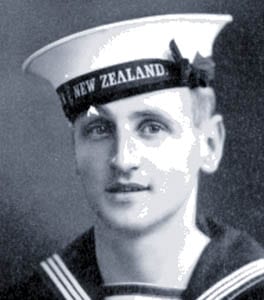 Captain Raymond Pugh-Williams joined the New Zealand Division of the Royal Navy Volunteer Reserve in 1936, training as a reservist onboard the minesweeper HMS WAKAKURA.  In December 1939 he was called up and joined the Royal Navy Volunteer Reserve.  After a brief training period in HMS PHILOMEL he was posted to the cruiser HMS ACHILLES, at that time was operating in New Zealand waters.  Throughout 1940 Pugh-Williams served in various harbour motor launches and minesweepers all of which were based in New Zealand waters.  In early 1941 he was sent to Australia to do a number of courses; upon his return to New Zealand joined the 25th Minesweeping Flotilla and served onboard the converted coastal trader GAEL and latterly the converted merchant ship MATAI.  In early 1943 Pugh-Williams became Captain of a Fairmile and served in both Guadalcanal and Wellington, New Zealand on patrol duty.  Towards the end of World War II he was sent to Britain and served in the destroyer HMS AVON VALE for a brief time before returning to New Zealand.  Pugh-Williams was discharged from the Royal New Zealand Navy in early 1946 having attained the rank of Lieutenant.

In 1947 Pugh-Williams entered the Merchant Navy and served in the Union Company. He joined the Royal New Zealand Naval Reserve and was active in completing considerable periods of naval training particularly in the survey vessel HMNZS LACHLAN.  He was promoted to Captain in the RNZNR in 1969 and retired in 1980.