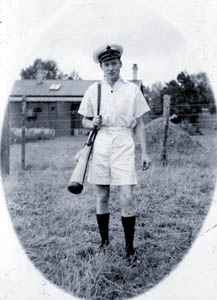 Mr Carlos Chandler was born in Auckland in 1915, leaving school when he turned sixteen to work in a variety of unusual jobs – horse dealer’s boy and skating rink assistant – before signing on with the Union Steamship Company.  Civilian life onboard the passenger vessel MARAMA included doing a summer run around New Zealand and a winter tour through the Pacific Islands.  Later onboard AWATEA and MOCURRA he ventured further afield up into the west coast of North America.

In 1937 he travelled to England onboard the Shaw Savill and Albion passenger ship TAMAROA as an assistant waiter.  Once in the United Kingdom he gained employment as a chauffeur/researcher for a writer before joining the P & O passenger ship, RAJPUTANA which took him to a variety of ports including Oporto, Sudan, Colombo, Singapore and Yokohama.  He then joined the mail vessel HIGHLAND CHIEFTAIN, as its interpreter, on its run across the Atlantic to the Canary Islands and down to South America.  By 1939 he was working for the Cunard Line onboard FRANCONIA, on its “millionaire run” up into the Baltic.

A brief stint onboard the neutral Irish ship NYME was followed by Mr Chandler volunteering for the RNZN in December 1941 and setting sail back to New Zealand.  His first naval posting as part of the T124 Scheme was to TAMAKI to take charge of the canteen and kitchens.  In July 1943 he was drafted to the IIes class minesweeper HMNZS SCARBA patrolling the Hauraki Gulf.

His next posting, to the Bird class minesweeper HMNZS KIWI, took Mr Chandler up to the Pacific Islands, where they found a torpedoed submarine which they managed to salvage.  HMNZS KIWI then sailed for South America to patrol a number of  “roads” off Guadalcanal.  It was on one of these reconnaissance patrols that they happened upon a beached American MTB with an Oerlikon, which they “borrowed”.  Mr Chandler saw the war out, back onboard the minesweeper HMNZS SCARBA.

Carlos Chandler was discharged from the RNZN in March 1945 having attained the rank of Steward.