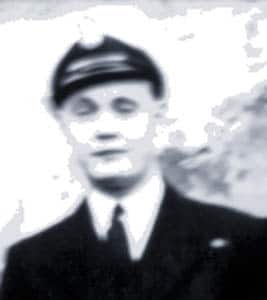 Petty Officer James Claridge joined the Royal Navy in 1945 as a Writer.  He spent time in various shore establishments including the Royal Naval manning depot GOLDEN HIND in Sydney, Australia and the naval base HMS TAMAR in Hong Kong after which he was demobilised.  Claridge signed back on and was posted to the Lion class battleship HMS VANGUARD where he remained for most of his three years with the Royal Navy.  Shortly before the end of his time in the Royal Navy there was a call for volunteers for the Royal New Zealand Navy.  In May 1950 Claridge joined, sailing to New Zealand onboard the New Zealand Shipping Company passenger-ship RANGITATA.

After six months ashore in the naval base HMNZS PHILOMEL he was posted to the frigate HMNZS TAUPO.  The ship was sent to Westport during that time to provide assistance during the 1951 wharf strike.  In mid 1951 he posted back to HMNZS PHILOMEL and a year later to Navy Office in Wellington to work in the pay office.  Claridge remained here until his discharge from the RNZN in mid 1956 having attained the rank of Petty Officer.

James Claridge retired from the RNZN in 1990 after 14 years service in the Royal New Zealand Navy as a civilian.