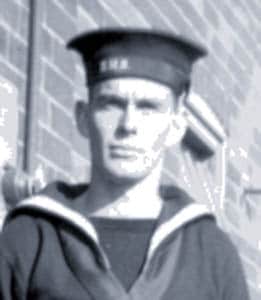 Commander John (Fergie) Schischka joined the Royal Navy under Scheme B provisions in early 1941.  After training as a Seaman at HMS GANGES he saw service in the destroyer HMS LOOKOUT and undertook officer training in 1942.

Following leave in New Zealand in 1945, Commander Schischka completed his war service as Bosun of the Yard at HM Dockyard, Hong Kong.