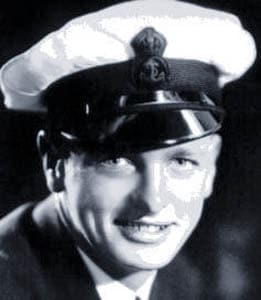 Commander Cecil Cutts joined the New Zealand Division of the Royal Navy in 1933 as a probationary supply assistant.  He did his basic training in HMS PHILOMEL which at that time was the training and depot ship that was berthed at Devonport dockyard.  After two months he was posted to the cruiser HMS DIOMEDE where he remained for two years before joining the cruiser HMS DUNEDIN for a further two years of service.  In 1937 he went on exchange service to Britain serving onboard the battleship HMS IRON DUKE for 18 months followed by a short stint in the cruiser HMS AURORA.

Cutts was posted to the cruiser HMS ACHILLES just before the outbreak of World War II and served as an ammunition handler during the Battle of the River Plate.  In early 1939 he returned to New Zealand and served in the shore establishments HMNZS PHILOMEL and HMNZS COOK until his promotion in July 1943 when he was promoted to Temporary  Stores Warrant Officer and commissioned.  After the cessation in hostilities Cutts became Supply Officer for the frigates HMNZS ARABIS and HMNZS ARBUTUS amongst other ships.  In late 1950 Cutts was sent to the United Kingdom to undergo specialised supply courses at the shore establishments HMS PRESIDENT, HMS CERES and HMS PHOENIX.  On his return to New Zealand he served in HMNZS TAMAKI on Motuihe Island, HMNZS PHILOMEL and the cruiser HMNZS ROYALIST.

In April 1964 Cecil Cutts retired from the Royal New Zealand Navy having attained the rank of Commander.