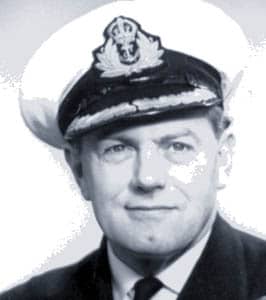 Captain George (Dudley) Pound was a Royal Navy Officer who was loaned to the Royal New Zealand Navy from 1957 until 1958 to become the Commanding Officer of the cruiser HMNZS ROYALIST.  During his time onboard, HMNZS ROYALIST completed a Far East commission for a period of one year.  Pound talks at length of this time and his experiences as a Commanding Officer of a New Zealand naval ship operating with the Royal Navy as part of the Far East Fleet.  Upon completion of his time Pound returned to the United Kingdom.