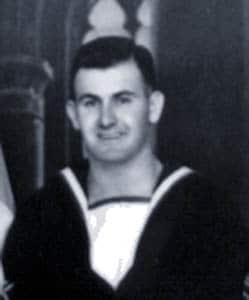 Chief Electrician Harvey joined the New Zealand Division of the Royal Navy in May 1936 as a Seaman Boy at the age of 15.  He had a unique career in that he served in each of the New Zealand cruisers HMNZ ships ACHILLES, LEANDER and GAMBIA that took part in the more significant World War II actions.  He describes the Battle of the River Plate, Kolombangara and the final actions against Japan in considerable detail.  This includes substantial discussion of the ships domestic activities, living conditions and lifestyle.

There is immense detail in this transcript of the various types of ships that Chief Electrician Harvey encountered in his service and their configuration and idiosyncrasies.

Chief Electrician Harvey trained as a torpedo operator and responsibilities included the ships electrical systems as well as Torpedoes.  As the war progressed this technology increased considerably and the torpedo operators and some telegraphists and radar officers combined to form the modern Weapons Electrical Engineering Branch.

Upon retirement in February 1951 Chief Electrician Robert Harvey became a school teacher and joined the RNZNVR and continued to pass on his knowledge to the new generation.