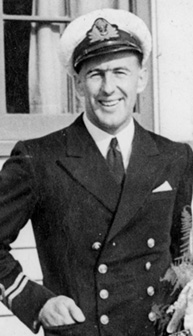 Lieutenant Andrew (Bill) Direen was initially accepted for service by the Royal New Zealand Air Force, but ultimately, in July of 1941 joined the Royal New Zealand Navy under the auspices of Scheme F.  He sailed to Britain onboard the converted troop carrier, the Shaw Savill passenger ship DOMINION MONARCH with 1300 other trainees and underwent basic training at the shore establishment HMS ST VINCENT.  Direen did his initial pilot’s training on Tiger moths at the Royal Air Force station ELMDON.  Upon completion of this training he was then sent to Canada to undertake advanced pilot training in Harvards.  In mid 1942 he returned to Britain and was sent to the Fleet Air Arm base HMS HERON in Somerset to undergo advanced  tactical training in Hurricanes.

With the completion of his flying training in early 1943, Direen joined 791 Squadron at the Fleet Air Arm base HMS CONDOR in Scotland.  In late June of 1943, he and other Fleet Air Arm personnel sailed to the United States onboard the converted troop carrier QUEEN MARY, in order to test, train on and ultimately convoy back to Britain, a squadron of Corsairs.  The testing was particularly rigorous, with a number of crashes and the identifying of a carbon monoxide problem with the aircraft.  The Corsairs were put onboard the aircraft carrier HMS ATHELING and taken to Ireland, from whence they were flown to Lancashire in England.  Training continued and a number of newly amalgamated squadrons began to fly on missions off the aircraft carrier HMS VICTORIOUS, the most famous of which – operation “Tungsten” – was the bombing of the German Capital battleship TIRPITZ in Kaa Fiord.  While building up operational experience Direen and his colleagues flew on a number of other missions including operations “Brawn” and “Lombard”.

Post D Day Direen transferred to an Air Force station in Ceylon and was involved in various bombing strikes on key sites mainly in Sumatra.  With the cessation of World War II hostilities, he briefly returned to Britain before journeying back to New Zealand, arriving home in early January of 1946.

Andrew (Bill) Direen was discharged from the Royal New Zealand Navy in May 1946 having attained the rank of  Lieutenant.