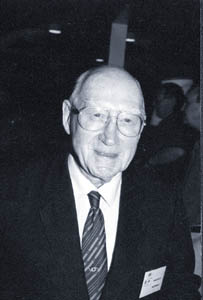 Temporary Lieutenant Maurice Newman joined the Royal New Zealand Navy Volunteer Reserve under the auspices of Scheme B in 1941.  He sailed for Britain via Panama and Halifax onboard the converted troop carrier the Shaw Savill Line DOMINION MONARCH. Disembarking in Liverpool, Newman and the rest of his Scheme B draft were immediately sent to HMS GANGES for basic training and thence to HMS LOOKOUT, a destroyer, to complete his mandatory sea time.  He then attended officer training at the shore establishment HMS KING ALFRED, where he graduated as a Sub Lieutenant with a specialisation in flight deck management.

Consequently he was posted to HMS BERMUDA, a cruiser on Russian convoy duty, where the ship’s main task was controlling long range coastal aircraft.  In October of 1943, while HMS BERMUDA was in the Bay of Biscay, Newman personally directed a long range fighter aircraft to intercept German planes, for which he was awarded the Distinguished Service Cross.

In 1944 when the Russian convoys were finished with for the winter and HMS BERMUDA had to have a major refit, Newman was posted to the corvette HMS POTENTILLA and went on a combined operations course.  After this he was sent on his foreign service leave back to New Zealand.  Newman sailed onboard the Shaw Savill and Albion Line WAIWERA arriving in home waters on Christmas Eve 1944, where he remained until the cessation of World War II hostilities.

Maurice Newman was discharged in May 1945 from the Royal New Zealand Navy having attained the rank of Temporary Lieutenant.