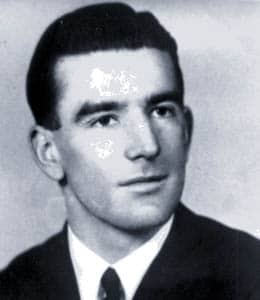 Lieutenant Desmond Lewis joined the New Zealand Division of the Royal Navy in late 1939 as an Able Seaman from the Merchant Navy.  He was posted to the minesweeper HMNZS THOMAS CURRELL which was working in New Zealand waters and then to the armed merchant cruiser HMNZS MONOWAI.  He was granted a temporary commission in December 1942 and travelled to Britain to train as a Fleet Air Arm Pilot.  This did not eventuate, necessitating a change of plan which in this instance was Officer training in HMS KING ALFRED.  Subsequently Lewis commanded Tank Landing Craft 933 during the Normandy Landings, this was badly damaged by a beach mine during the operation.  However he and his crew transferred to another landing craft and continued ferrying supplies to the European coast.

In late 1944 Lewis was then sent to what was then known as the “Far East” to take part in operations in Burma, but contracted dengue fever enroute, and after being hospitalised in Bombay was sent back to New Zealand.  He was then posted to minesweeping duties onboard the Isles class trawler HMNZS KILLEGRAY and was involved in the “Hundred Mile Sweep” of New Zealand waters.

Desmond Lewis was discharged in March 1946 having attained the rank of Lieutenant.