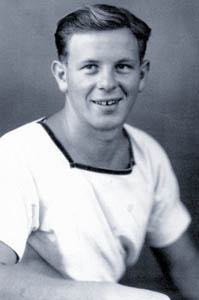 Leading Seaman Norman Scoles joined the RNZN in 1945 as a Seaman Boy and trained at HMNZS TAMAKI on Motuihe Island.  His first ship was the cruiser HMNZS  BELLONA which was based in New Zealand and South Pacific waters.

The Korean War broke out while Able Seaman Scoles was onboard the frigate HMNZS ROTOITI and that ship joined the United Nations Fleet in Japan.  A member of a landing party that captured two Koreans, he then went on to participate in a night raiding party that in spite of the death of  Able Seaman R.E. Marchioni by enemy fire, resulted in Leading Seaman Scoles being awarded the Distinguished Service Medal, personally, by Her Majesty Queen Elizabeth.  Norman Scoles was discharged from the RNZN in March 1954.