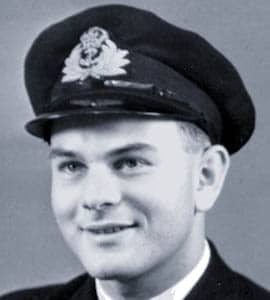 Lieutenant Graham Alpe joined the Royal New Zealand Volunteer Reserve under the auspices of Scheme B in 1943.  After completing basic training at HMNZS TAMAKI he sailed for Britain via the West Indies onboard the Shaw Savill and Albion passenger-cargo steamer AKAROA.  After completing further basic training he was posted to the cruiser HMS LONDON in order to complete his mandatory sea time. During this time HMS LONDON escorted Winston Churchill, and carried members of his staff to the Algiers Conference.

Having completed his sea time Alpe was then sent to the training establishment HMS KING ALFRED to undertake his Officer training, after which he was posted to India to a landing craft squadron at Vishakhapatnam.  Operations against the Japanese followed onboard Landing Craft Infantry LCI120 including landing Royal Marine Commando squadrons up various waterways and on a number of islands in Burma.  Following the end of the war Alpe was posted to the manning depot GOLDEN HIND in Sydney.  He was lucky enough to secure a seat on a Liberator bomber aircraft back to New Zealand.

Graham Alpe was discharged in early 1946 having gained the rank of Lieutenant.