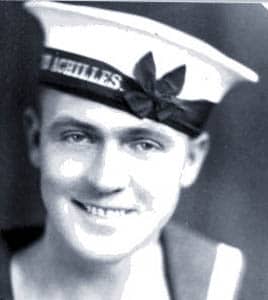 Lieutenant Commander Charles Harris joined the New Zealand Division of the Royal Navy in 1933 as a Stoker. After completing basic training in the shore establishment HMS PHILOMEL he served in the cruisers HMS DIOMEDE and HMS ACHILLES and was onboard the cruiser HMS DUNEDIN in 1937 when that ship was returned to Britain.  From Britain, Harris was sent to Hong Kong and posted to the destroyer HMS DELIGHT.  He rejoined HMS ACHILLES in 1939 for the ship’s return to New Zealand waters and subsequently was still on board, watch-keeping in the boiler room, in the first days of World War II, during the Battle of the River Plate.

On returning to New Zealand in 1940 Harris transferred to the Regulating Branch and served in this capacity in HMS ACHILLES, the cruiser HMNZS LEANDER and in the shore establishment HMNZS COOK in Wellington. He saw out the remaining years of the war in the cruiser HMNZS GAMBIA and was a member of the landing force that occupied Yokosuku Naval Base after the cessation in hostilities.

After returning to New Zealand Harris was Master at Arms at HMNZS PHILOMEL during the mutiny in 1946; he was commissioned in March 1949 and promoted to commissioned Master at Arms, a position he retained while in the United Kingdom undertaking courses at HMS COLLINGWOOD, the Royal Navy’s electrical training school and latterly, upon his return to New Zealand and subsequent service in the cruiser HMNZS BELLONA.  In 1956 he joined the cruiser HMNZS ROYALIST when that ship was commissioned.

In 1959 Harris became First Lieutenant of the Bathurst class corvette, the training ship HMNZS STALWELL,  and spent his final years in the Royal New Zealand Navy as the Assistant Drafting Officer in Auckland.

Charles Harris retired from the RNZN in April 1964 having attained the rank of  Lieutenant Commander.