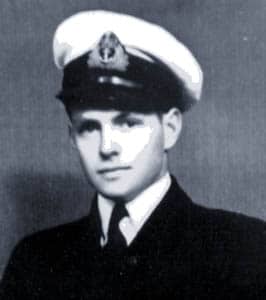 Commander James Lennox-King joined the Royal New Zealand Volunteer Reserve in March 1931 as an Ordinary Seaman.  In 1940 having attained the rank of Lieutenant he was posted to the training establishments HMS VICTORY and HMS DRAKE in Britain for training.  He then posted to the destroyer HMS ANTHONY, where Lennox-King was a Gunnery Officer and consequently Mentioned In Despatches in regard to operations against the Vichy French during the take over of Madagascar.

During the D-Day landings on the Normandy coast Lennox-King was once again a Gunnery Officer, this time onboard the destroyer HMS VIRAGO.  This ship was consequently sent out to what was then known as the Far East; upon the cessation of World War II Lennox-King returned to New Zealand where he rejoined the Auckland Division of the RNZVR.

James Lennox-King retired from the RNZN in April 1966 having attained the rank of Commander.