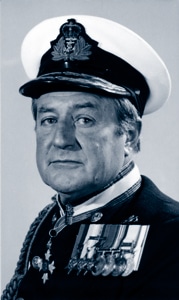 Rear Admiral John McKenzie, a New Zealander, joined the Royal Navy as an Officer Cadet in 1942.  On completion of his training at the Royal Naval College BRITANNIA he joined the cruiser HMS DEVONSHIRE as a Midshipman before being posted to HMS HAWKINS. While onboard HMS HAWKINS he witnessed the sinking of the passenger ship KHEDIVE ISMAIL.  On completion of his Sub Lieutenant’s training McKenzie joined the submarine service and describes the taking into custody of a number of German U Boats in the final days of World War II.

Due to cutbacks in the Royal Navy, in 1947 he joined the Royal New Zealand Navy.  His first posting was as First Lieutenant of the corvette HMNZS ARBUTUS and he describes the aftermath of the 1947 mutiny and the consequences of that action to what was then a young navy.  Time onboard HMNZ Ships HAWEA and TUTIRA followed before he returned to the United Kingdom in late 1949 to complete a Torpedo Anti Submarine course.  A little over two years later McKenzie, back in New Zealand joined the cruiser HMNZS BELLONA where he remained for a further two years before joining the frigate HMNZS PUKAKI for war service in Korea.

In early 1955 McKenzie was loaned to the Royal New Zealand Air Force in Fiji, this was followed by the command of the corvette HMNZS TUI and the minesweeper HMNZS STALWELL. He spent time at HMNZS WAKEFIELD in Wellington as Director of Undersea Warfare in 1956, returning to sea in early 1962 to take command of the new frigate HMNZS OTAGO.  On promotion to Captain in 1964, McKenzie served first as the Captain of HMNZS PHILOMEL then as the Deputy, then Head of the New Zealand Defence Liaison Staff in London.  He returned once more to New Zealand in 1970 becoming  Assistant Chief of Defence Staff (Policy) then as the Deputy Chief of Naval Staff.  After a period as Commodore Auckland he became the Chief of Naval Staff.  He retired from the RNZN having attained the rank of Rear Admiral, in 1977.