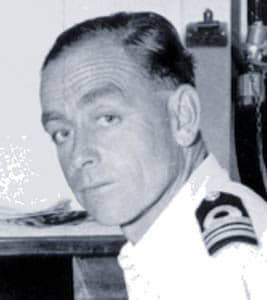 Commander Lionel Hodge joined the Royal New Zealand Navy Volunteer Reserve under the provisions of Scheme B in 1942. He undertook basic seaman training in Britain at HMS Ganges, spending his mandatory sea time on board the escort destroyer HMS Albrighton, which took part in the landing at Dieppe. Officer training at HMS King Alfred followed, after which he served on, and in due course commanded landing craft. Hodge was later in command of such a vessel during the D Day operations on the Normandy coast. He was discharged shortly after the end of WWII, having achieved the rank of Temporary Lieutenant.

In 1946, Hodge joined the Royal Navy, having been turned down by the Royal New Zealand Navy, and served in the Far East for two years before being lent to the RNZN. During this period he served in the frigate HMNZS Tutira which was one of the first frigates to go to the Korean War. In May 1952, Hodge left the Royal Navy and formally joined the Royal New Zealand Navy. He served in a number of vessels during his time with the RNZN including the command of the frigate HMNZS Rotoiti during the nuclear testing on Christmas Island and the Antarctic support vessel HMNZS Endeavour, completing a number of supply trips down to the ice.

Lionel Hodge retired as Commander in 1970.