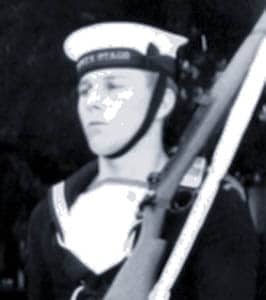 Lieutenant Lawrence McGuire joined the Royal New Zealand Navy in 1957 as a junior mechanical engineer and proceeded immediately to HMNZS Tamaki on Motuihe Island for basic training, after which he completed three months of branch training at HMNZS Philomel. His first sea posting was to the cruiser HMNZS Royalist, where he stayed for some 18 months, completing a tour of the Far East in company with units of the Royal Australian Navy.

Upon his return to New Zealand in early 1960, McGuire was then flown out to the United Kingdom to stand by HMNZS Otago for the ship’s commissioning. In early 1962, McGuire was once more back in New Zealand. His next posting was HMNZS Tamaki for six months, after which he was flown to the United States to stand by the commissioning of the Antarctic support ship HMNZS Eendeavour. A two-year stint on board the frigate HMNZS Taranaki followed. In early October 1963, the ship went to the aid of the survey vessel HMS Cook, which had holed herself on a coral reef just off Suva and was sinking fast.

In mid 1966, McGuire was posted to HMS Blackpool, a Royal Navy loan ship, which was undergoing an extensive refit in the United Kingdom. Service onboard the survey ship HMNZS Lachlan followed for almost six years from 1969, apart from brief periods ashore and in the frigate HMNZS Otago. In 1975, McGuire joined the survey vessel HMNZS Monowai, where he remained until early 1978.

In 1980, McGuire passed examination for promotion to Commissioned Officer and took over the running of the Damage Control School at HMNZS Philomel through a period of major expansion and renovation. In October 1990 he became Staff Officer Nuclear, Biological and Chemical Defence (NBCD).

Lawrence McGuire retired from the RNZN in March 1993 having attained the rank of Lieutenant.