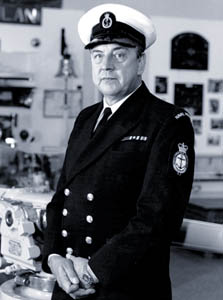 Chief Petty Officer John Carter joined the Royal Navy on American Independence Day 1950 as a 15 year old seaman boy.  His initial training took place at the training establishment ST VINCENT and onboard the frigate HMS WIDEMOUTH BAY in the North Sea.  After this training period he undertook a seaman gunner course at  the training establishment HMS PEMBROKE and was consequently posted to the destroyer HMS ARMADA which then sailed to the Mediterranean to join the British Fleet for three years.  From HMS ARMADA he transferred to the cruiser HMS SUPERB which was bound for the West Indies.

While he was in the West Indies, Carter’s parents immigrated to New Zealand, so in 1955 he transferred to the Royal New Zealand Navy and took up his first posting in the RNZN as a gunnery instructor at HMNZS TAMAKI on Motihue Island, a duty he would perform many times throughout his career in the RNZN.  Carter’s first RNZN ship was the cruiser HMNZS ROYALIST in which he spent a great deal of time and is particularly eloquent on that ship’s armament.

In 1959 Carter was part of the commissioning party for HMNZS OTAGO, which carried out her work up and sea trials from the United Kingdom across to Copenhagen.  The ships delivery voyage to New Zealand was then embarked on through the Mediterranean Sea and Indian Ocean via India, Ceylon and Singapore, arriving in Fremantle in Australia on New Years Eve.  On his return to New Zealand Carter did another stint as an instructor at HMNZS TAMAKI before joining the frigate HMNZS ROTOITI for 60 South latitude, 900nm south of Bluff, in order to provide up to date weather reports and an air sea rescue service to Operation Deep Freeze aircraft.

Time onboard the frigate HMNZS TARANAKI followed, when that ship was involved in the Borneo conflict, chasing kumpets (boats) and earning the entire crew a General Service Medal.  After TARANAKI, there was another trip to the ice in ENDEAVOUR, before Carter took on the role of Training Chief at HMNZS TAMAKI for five years.  Carter retired with the rank of Chief Petty Officer in 1984.

In 1988 John Carter became a member of staff at the Navy Museum, where he remained until his retirement in April 2000.