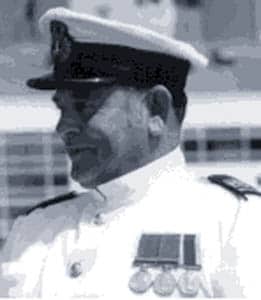 Warrant Officer Terence Bruce joined the Royal New Zealand Navy as a seaman boy in February 1954.  After basic training at HMNZS Tamaki on Motuihe Island he was posted to the frigate HMNZS Hawea, which at that time was operating in coastal waters around New Zealand. Shortly thereafter it sailed to Australia for the Hobart Regatta in company with the cruiser HMNZS Black Prince.  After HMNZS Hawea was paid off, Bruce joined HMNZS Black Prince, which met up with a large flotilla of Australian ships. They sailed up through the inside of the Barrier Reef to Singapore for the SEATO Exercise, then sailed from Singapore to Manila for a fleet gathering. Upon its return to New Zealand, HMNZS Black Prince, like HMNZS Hawea was paid off, necessitating Bruce’s posting to the cruiser HMNZS Bellona, which promptly set sail to be returned to the United Kingdom. While in the United Kingdom, he trained as a radar plotter before becoming part of the cruiser HMNZS Royalist commissioning party.

On her voyage back to New Zealand, HMNZS Royalist was briefly involved in the Suez crisis but was withdrawn under the directive of the New Zealand Government. It was in this area that Bruce witnessed the approach of Egyptian MTBs from his action station in the operations room.

Shortly after his return to New Zealand, Bruce did further radar plot training at the Australian shore base HMAS Watson before joining the frigate HMNZS Pukaki to take part in the nuclear tests off Christmas Island.  Bruce’s role was the tracking of meteorological balloons to determine the weather for the tests. Following his time onboard HMNZS Pukaki, he was posted to HMNZS Tamaki and as Coxswain of various ships. A second posting to HMNZS Royalist followed, after which he joined HMNZS Rotoiti to record the weather at 60 South for the summer flights to the polar base.

In March 1965, Bruce became Coxswain of the coastal minesweeper HMNZS Santon and describes in detail this ship’s activities during the early days of the Indonesian confrontation. He also served onboard the frigate HMNZS Blackpool when the US naval destroyer USS Frank E. Evans was cut in half by the Australian aircraft carrier HMAS Melbourne, and talks of the subsequent rescue operation. He was also attached in a training role to the Singaporean Navy in December 1969 when that navy was first established.

Further postings included the frigates HMNZS Taranaki, HMNZS Waikato during the rescue of a Russian seaman in the Southern Ocean, HMNZS Canterbury during a deployment to the Persian Gulf and in a number of roles onshore including Operations Chief at COMAUCK Headquarters at HMNZS Philomel.

Terence Bruce completed his RNZN service in September 1987 having achieved the rank of Warrant Officer and subsequently joined the dockyard at Devonport in January 1994 as Bosun of the Yard, where he remained until his retirement in January 1998.