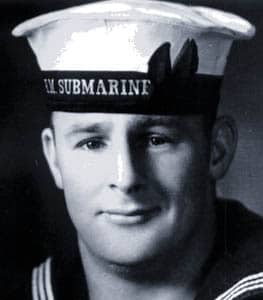 Petty Officer Philip Le Gros, better known as “Froggy”, joined the New Zealand Division of the Royal Navy in 1939 as a 2nd Class Stoker.  On the outbreak of World War II he was posted to the cruiser HMS LEANDER and whilst serving in the Mediterranean volunteered for service in submarines, joining the Triton class submarine HMS TORBAY in mid-1941.  HMS TORBAY, under the control of Lieutenant Commander Miers was involved in a series of operational patrols which remain a legend within the Royal Navy.  They took off soldiers from Crete which involved Le Gros swimming a life line into land to allow the soldiers to float out to the submarine.  In addition HMS TORBAY landed a commando team in Libya whose aim was to capture General Rommel and also followed an enemy convoy into Corfu Harbour, subsequently decimating the ships in harbour with torpedoes before making their escape.  For this later action Lieutenant Commander Miers was awarded the Victoria Cross and Le Gros himself was Mentioned in Despatches.  Every man in the HMS TORBAY crew in fact received an award for this action.

Le Gros served in HMS TORBAY in the North Atlantic and at the end of the war was a member of the crew of a captured German U boat.

After returning to New Zealand he served in the corvette HMNZS ARBUTUS and was coxswain of the RNZN liberty boats.  Philip Le Gros retired as a Petty Officer from the RNZN in 1951.